The invasion of the False Armyworm should be declared a national disaster so that emergency funds can be made available to affected provinces before it reaches “catastrophic levels” the DA said on Monday.

DA MP Annette Steyn said as it stood, South Africa met all the requirements to declare the crop infestation a national disaster according to section 23(6) of the National Disaster Management Act. The Act allowed for a disaster to be declared nationally if more than one province was affected.

“It is vital that the government respond effectively and efficiently, and as soon as possible. The consequences of not doing so could lead to job losses which our country cannot afford, should farmers lose crops.

“The worm could also compromise our food security, pushing the price of food up, affecting the ability of millions of South Africans to put food on the table for their families,” she said in a statement.

The pest, which causes massive crop loss, has been nibbling through South African crops as producers try to recover from two consecutive years of a drought brought on by the El-Nino weather system.

“The worm could also compromise our food security, pushing the price of food up, affecting the ability of millions of South Africans to put food on the table for their families”

The department of agriculture has asked chemical suppliers to urgently register products that can be used to control it.

The DA intends on calling on Cooperative Governance and Traditional Affairs Minister Des van Rooyen to declare the ‘invasion’ of the pest a national disaster, so that it can trigger the release of “much-needed funding to assist maize farmers who are currently struggling to fight this plague,” it said.

According to the latest reports, the pest has spread to Limpopo, North West, Gauteng, Free State, Mpumalanga and Northern Cape.

Steyn accused the Department of Agriculture of being “unacceptably slow to respond to these developments”.

She said the department was warned in October 2016 by the International Association for the Plan Protection Sciences (IAPPS) which, at the time, confirmed the outbreak of the pest in Nigeria. The IAPPS warned at the time that the pest could spread rapidly, she said.

The department was not available to comment, despite several calls and messages. 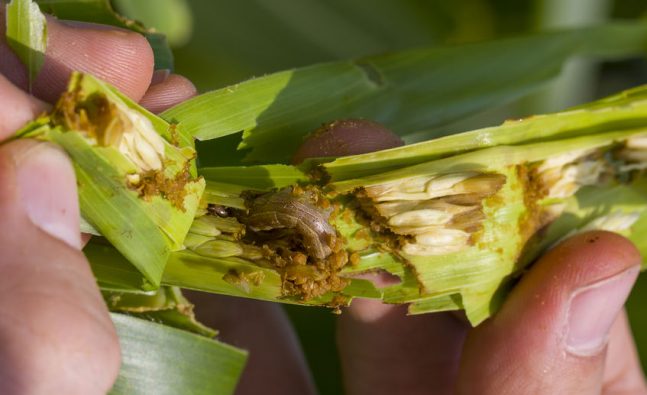